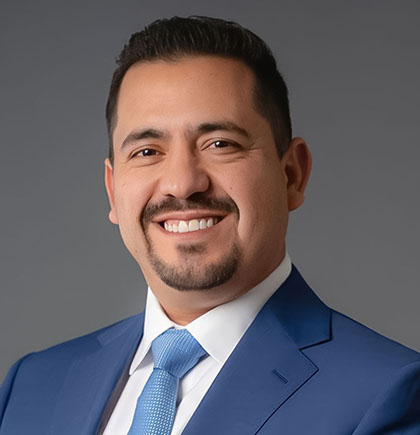 Josh Nuñez is a proud father of two boys, Bentley and Jett. He is married to his college sweetheart Vanessa Costilla, a Gastroenterologist.

Josh is a graduate from Texas Tech University where he received degrees in both biochemistry and mathematics and a minor in biology. He attended the Texas Tech School of Law for a brief period and graduated from the Phoenix School of Law where he served as an executive board member of the prestigious Phoenix Law Review.

Josh founded the Nuñez Law Firm in 2013 to serve the needs of the Spanish speaking community in Arizona in areas of injury law, the workers’ compensation system, immigration law, and as a criminal defense attorney.

Josh has served on various nonprofit boards, including Unlimited Potential, Center for Neighborhood Leadership, the Colten Cowell Foundation, and the One Community Advisory Board.

Josh is an avid fan of the following sports teams: the San Francisco 49ers, the Texas Tech Red Raiders, and the Mexico National Soccer Team.